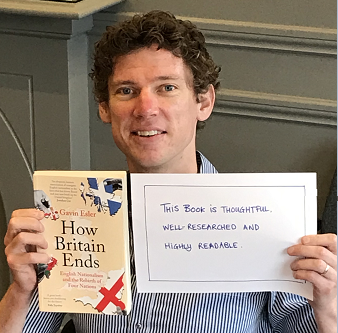 How Britain Ends by Gavin Esler

What are the ties that bind the United Kingdom together today? How can the four nations of England, Scotland, Wales and Northern Ireland reach agreement to resolve their widening differences? What does it mean to be British in the twenty-first century? These questions, and many others, are explored in Gavin Esler’s new book which illustrates how the UK, as currently constituted, is in danger of falling apart.

Mr Esler explains how the ‘awkward union’ of the UK came into being, and draws attention to devolution in Scotland, Wales and Northern Ireland in the late 1990s – which means there are now four separate legislatures in the UK  with four different voting systems. Brexit has created pessimism and instability within each of the four nations and there is now a real risk that the UK will come apart.

To address this imminent crisis, Mr Esler outlines a number of basic principles which, he hopes, will help the situation. He categorizes these as the ‘Three Rs’ – Recognize, Repair and Reform. The first principle is to recognise the enormous problems that the UK faces, for example, we must recognise that a London-centric economy is failing and that resources should be better distributed. The second principle is that we should repair those institutions that are desperately struggling, such as the NHS and local government, all of which require massive investment and greater local accountability. The third principle is to reform the electoral system, in particular the two-party system which produces majorities for parties that almost never win a majority of votes. In the 2019 general election Boris Johnson secured an 80-seat majority, but with only 43% of the votes cast, meaning that 57% of UK voters rejected his party.

Mr Esler proposes other reforms including the four nations having greater powers devolved from Westminster’s centralized control. He advocates the idea of a modern federal democracy (adapted from U.S., German and Swiss examples) in which a federal government is responsible for major affairs such as the currency, trade, defence and homeland security, with all other matters being fully devolved to the parliaments of each of the four nations. He also suggests that the House of Lords is replaced by a Senate drawn from members of each nation to deal only with issues of the greatest urgency. Such measures would create a more independent democratic system for the UK and bring each of the four nations closer to the people they are meant to serve.

Mr Esler is a seasoned journalist and news commentator and his book is thoughtful, well-researched and highly readable. This book will appeal to all who are interested in politics, current affairs and the present state of the UK.