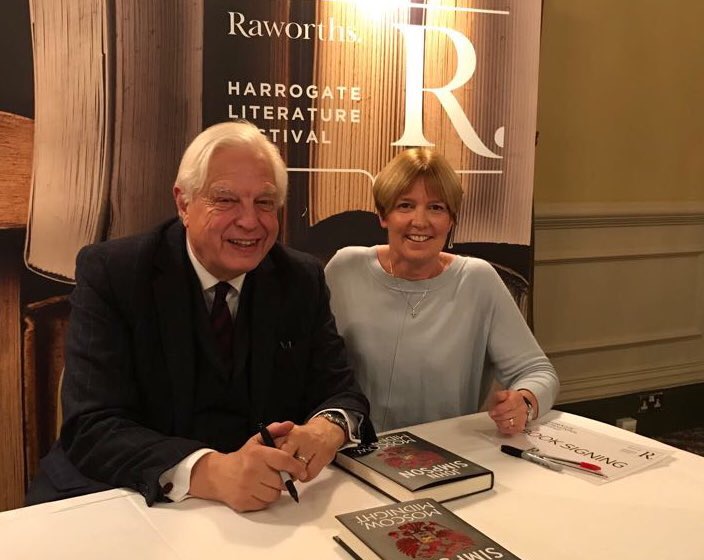 Also a sell-out was viral sensation, Gill Sims, author of Why Mummy Swears, who attracted a 300-strong, mainly female audience.  From mummies to biker dudes, biker helmets were the must have accessory amongst audience members for TV presenter and producer, Henry Cole, who pulled a loyal fan base with his memoir, A Biker’s Life; interviewer Steven Gale hailed Cole as ‘candid, irreverent and wise.’

Politics loomed large with a lively discussion with activist and author, Liam Young, who shared his insights on the rise of Jeremy Corbyn and the role of the youth vote, and historian David Starkey on Henry VIII as the first Brexiteer. Comedy came in the form of Robin Ince.

The festival is supported by long term sponsor, Raworths. Zoe Robinson, Raworths Managing Partner, said: “It was an incredibly uplifting, inspiring, insightful and educational festival. Listening to authors covering all aspects of life attracted an incredibly diverse audience and we felt very proud to back an event that offered something for everyone, with household names that really put Harrogate on the literary map.”

Jane Hawking, the first wife of late physicist and author Stephen Hawking, put straight the reports about her ‘attack’ on the film adaptation of her memoir, The Theory of Everything. She said, “A few weeks ago when I was talking about this subject there were journalists in the room, and after my talk there were screaming headlines, ‘Jane Hawking didn’t like the Theory of Everything!’ Oh my goodness I felt so embarrassed because that’s not true, it was very powerful and very moving, but I had been warned that some facts might be distorted in the interest of limiting the running time to two hours.”

BBC Radio 4 also recorded a live episode of the Round Britain Quiz in front of an audience at the Crown Hotel.

Thrilling authors included Imram Mahmood on his novel, You Don’t Know Me interviewed by BBC Radio 2’s producer, Jo Haddow who gave insights into his writing and career as a criminal defence barrister. Downton Abbey actress turned debut author, Catherine Steadman explained how she wrote her hit debut, now in production with Reese Witherspoons’s film company, in just two months. The book is currently being adapted to be filmed in New York, with major stars connected to the movie.

Local historian and author, Malcolm Neesam, gave a talk on his new book, Music Over the Waters, which was commissioned to celebrate the 50-year history of Harrogate International Festivals, and explores how the town’s musical culture led to the creation of the festivals.

Closing the event were a wine-tasting with Oz Clarke, who was in conversation with broadcaster, Mark Lawson, and the Apprentice and Countdown star Nick Hewer, also interviewed by Lawson. Talking about Lord Sugar, Nick said: “I see him as somebody who is short on charm, short on conversation, not inquisitive but loyal, generous, kind and extremely talented.”

Helen Donkin, Literature Festivals Manager at Harrogate International Festivals, said: “It was an incredible four days, and we’ve had some fantastic audience feedback, with one audience member saying they found it, ‘inspiring, incredible and has lit a fire under me.’ This is exactly what we at the Festivals want to achieve.”